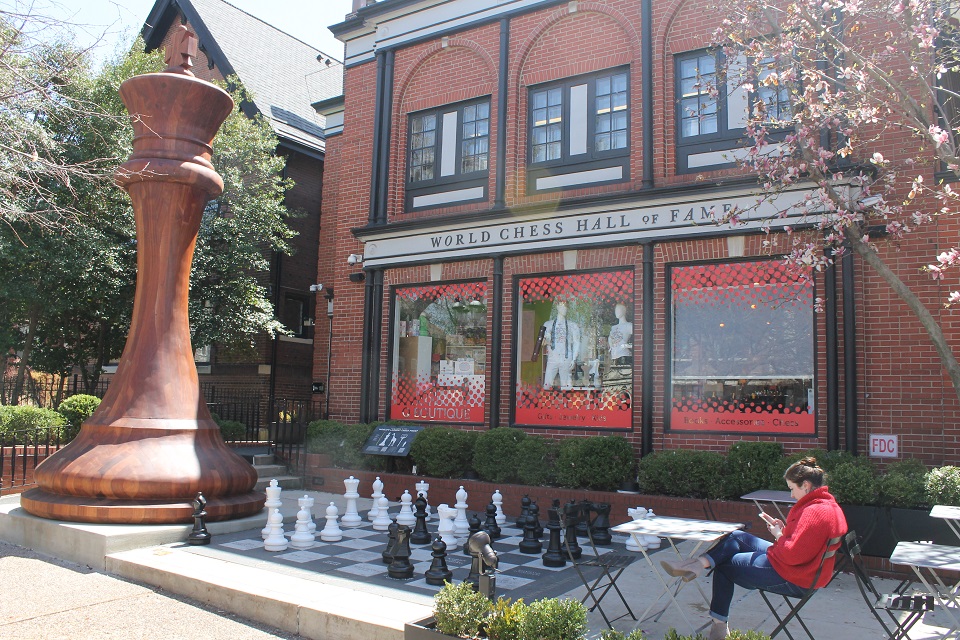 The chess piece construction began off-site with 9,000 board-feet of 4” Rough Sawn Sapele Mahogany of varying widths. The first step was machining down all of the members to be used to the same dimensional thickness. The lumber members were then cut into large blocks and assembled by clamping and gluing those individual blocks together in a stair stepped fashion, to roughly translate changes in shape. This created a very roughly-shaped, massive block for each of four sections. A system of interlacing the members was developed and utilized by the carpenters in assembling the 4 major mass block components – the base, the stem, the cap, and the cross/top.

Once the massive blocks were completed, the process of bringing each closer to its finished shape was accomplished by seasoned carpenters and tradesmen sculpting with grinding wheels, chainsaws, belt sanders, chisels, and other power tools. Templates were created with oversized dimensions for guides in the rough sculpting. Once each section was close to its finished shape, jigs were created and routers were utilized to cut away the surplus material. Chisels and other hand tools were also used during this step. In this manner, each section was brought to within 1/4” to 3/8” of its proposed finish dimensions. The final shaping was performed using belt sanders, orbital sanders, and hand sanding, working to the finished-dimension templates that were also made by the team of builders.

As each major component was close to completion, a system of keying members were installed in each piece to allow the adjoining pieces to be stacked on top of each associated carrying member below, so the complete piece could be assembled on-site.